What document does the notary require to identify the person, applying for notarization? Why am I required to submit passport when applying to the notary? Is it legal?

Yes, it is legal, as the notary follows art. 43 of the Notaries Act of Ukraine. According to it, when notarizing, the notaries identify persons of civil relations participants that apply for notarization.

How can the lender obtain funds, having a notary certified Loan Agreement?

Please, clarify if it is possible to notarize immovable property sales agreement with simultaneous conveyance to mortgage?

Yes, it is possible. According to Art. 18 of the Law of Ukraine “On mortgage”, if the mortgage covers loan, credit for purchase of immovable property, conveyed to mortgage, sales agreement of this immovable property and mortgage agreement may be concluded simultaneously. It shall be mentioned that according to art.  55 of the Notaries Act of Ukraine, the mortgage agreements, the subject of which is the real estate, belonging to the third parties and shall be ownership of the mortgagor after concluding this agreement, shall be certified before execution of the established under legislation document on the entitlement of the mortgagor for the property.

The following issue occurred in inheritance: Could one person make several wills for different persons and which will shall be considered as valid? Shall the previous will be cancelled when making one?

Yes, he/she could. The valid will is the one made the last one. According to p.2 of art. 1254 of the Civil Code of Ukraine, the testator has right to make a new will at any time. The will that was made later, cancels the previous one completely or in the part, where it contradicts it.

Husband purchased an apartment before marriage. has the wife right for a part of it after divorce?

According to part one of article 57 of the  Family Code of Ukraine, personal private property of wife (husband) is the following:

1) property, obtained by her (him) before marriage;

2) property, obtained by her (him) during the marriage, but on the basis of gift deed or as inheritance;

3) property, obtained by her (him) during the marriage, but for the funds, belonging to her (him) personally.

Taking into consideration the above mentioned, the property that is legal object of joint property of spouses. As the apartment, belonging to the husband, purchased by him before registration of marriage, belongs to him personally and shall not be admeasured.

However, according to article 62 of the Family Code of Ukraine, if property of wife (husband) during marriage significantly increased in its value due  to mutual labour or cash costs or expenses of the other of the spouses, in case of dispute, it may be recognized under the court decision as legal object of joint property of spouses.

Shall gift agreement of movable property be notarized (a natural person makes a gift to a legal entity)?

However, according to part  4 Art. 209 of this Code, upon demand of a natural person or legal entity, any deed with its participation may be notarized.

I would like to make a will so that its contents would be disclosed only after my death. Is it possible?

Shall gift agreement of immovable property be notarized (a natural person makes a gift to a legal entity)?

Part 2 Art. 719 of the Civil Code of Ukraine states that gift agreement of immovable property is concluded in written form and shall notarized.

Is a foreigner enabled to issue a power of attorney in Ukraine? What documents shall he provide to the notary?

According to Art. 43 of the Notaries Act of Ukraine, identification of a person shall be conducted via passport of the citizen of Ukraine or other documents, which make any doubts impossible concerning the citizen, who applied for notarization (note of  author – for a foreigner it may be permanent residence permit of a person, residing in Ukraine, internal passport of a foreigner or document, substituting it).

So, to issue a power of attorney, foreign citizen shall provide to the notary his internal passport, if available –  permanent residence permit of a person, residing in Ukraine, registration number of taxpayer card, visa. Besides, if the internal passport is made in a foreign language (which the notary does not know), the notary shall be provided with translation of passport, made by the translator with relevant qualification.

Is it possible to terminate gift agreement? If yes, than what is the procedure?

After death of my sister, I got to know that she left me two wills. Which will shall be used for execution of inheritance?

Pursuant to part 3, 4 Art. 1254 of the Civil Code of Ukraine, the testator has right to make a new will at any time. The will that was made later, cancels the previous one completely or in the part, where it contradicts it.

So, it means that execution of inheritance shall be made according to both wills, unless they contradict each other. In case of disputes, the valid will is the one that was made later.

What if the maximum period of time that a power of attorney may be issued for?

How to find us 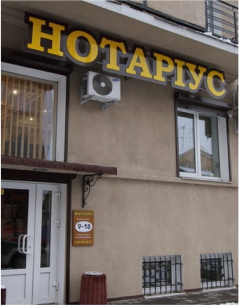